Besa: Muslim Albanians Who Rescued Jews During the Holocaust

Following the German occupation in 1943, the Albanian population, in an extraordinary act, refused to comply with the occupier’s orders to turn over lists of Jews residing within the country’s borders. The Albanians not only protected their Jewish citizens, but also provided sanctuary to Jewish refugees who had arrived in Albania, when it was still under Italian rule, and now found themselves faced with the danger of deportation to concentration camps. The remarkable assistance afforded to the Jews was grounded in Besa, a code of honor, which still today serves as the highest ethical code in the country.

This presentation coincides with the traveling exhibit, “Besa: Muslim Albanians Who Rescued Jews During the Holocaust” which will be on display at the Holocaust Center for Humanity, now through December 11, 2022. This exhibit was developed by Yad Vashem. 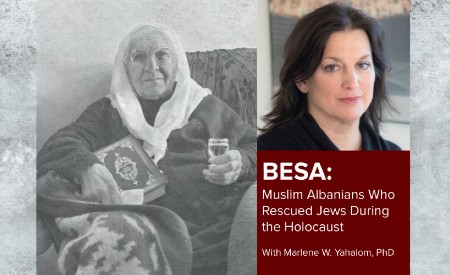